Himeji Castle was originally built as a fort in 1333 on Himeyama Hill by a samurai named Akamatsu Norimura (1277-1350). During turbulent times, his successors Hashiba Hideyoshi (1537-1598, later called Toyotomi Hideyoshi) and Ikeda Terumasa (1565-1613) succeeded in their dreams of expanding it into a castle. By 1618, it looked almost as it does today.

Chalk-white Himeji Castle is also known as Shirasagi (White Egret) Castle because of its resemblance to a white egret taking flight from the water.

Himeji Castle’s level of beauty is unparalleled in the world and it exhibits the highest levels Japan’s expertise in wooden architecture. The keep towers, turrets, gates, earthen embankments, stone walls, and moats—which date back to the beginning of the 17th century when castle construction was at its peak—are well-preserved. The ingenious defensive measures implemented here make it the best example of Japan’s unique castle structure. In 1993, this acclaimed landmark was registered as Japan’s first World Heritage Site.

The striking Main Keep stands in the southwest corner. From the outside, the castle appears to have five floors, but there are actually six above-ground floors and one basement floor on the inside. A pair of giant fish-shaped tiles adorn the tops of both sides of the main building, while curved karahafu gables and pointed chidorihafu and ochidorihafu gables provide the structure aesthetic balance.

The West Small Keep stands three stories high with two further levels below ground. It connects to the Main Keep through the Ni Watari-yagura roofed passage on the east and the Ha Watari-yagura roofed passage on the north. The Mizurokumon entrance is on the east side of the basement. There is a noki karahafu gable on the south side. The open windows on the third story are bell-shaped katomado windows with black lacquered frames and metal fittings.

The East Small Keep lies to the north of the Main Keep and has three above-ground and one below-ground floors. It connects to the Main Keep via the I Watari-yagura roofed passage on the south and the Ro Watari-yagura passage on the west. Like the West Small Keep and the Northwest Small Keep, it has a watchtower atop a two-floored turret that allows expansive views far and wide. Unlike its counterparts, the façade of this keep is integrated with the neighboring passages and lacks karahafu gables and katomado windows.

The Northwest Small Keep stands to the northwest of the Main Keep and has four floors and a basement. It connects to the Main Keep by way of the Ro Watari-yagura roofed passage on the east and the Ha Watari-yagura roofed passage on the south. There is a noki karahafu gable on the west side on the first story and two bell-shaped katomado windows with black lacquered frames and metal fittings on both the south and west sides. The west side is the most elaborately designed face of the keep. 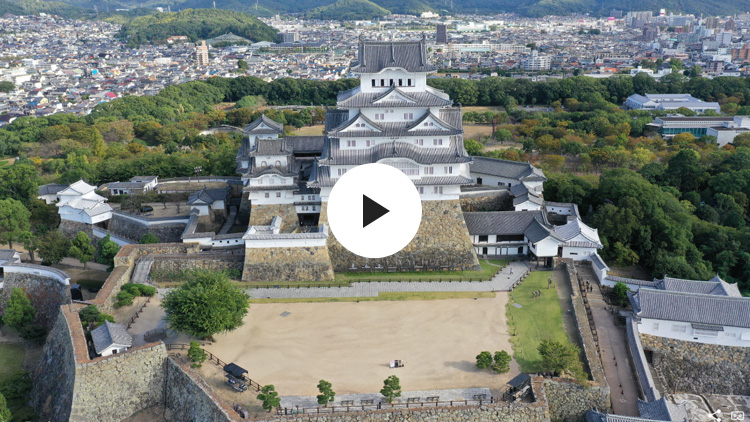