Takeda Castle is a rare example of a Japanese mountain castle that has retained most of its original structure. It is also known as Torafusujo/Kogajo (Reclining Tiger Castle) because of its resemblance to a reclining tiger.

Early on clear mornings in late autumn, a veil of mist sometimes forms around the mountaintop castle. This unkai (sea of clouds) makes the castle appear to be floating in the sky. This evocative image has inspired the nicknames “”Castle in the Sky”” and the “”Machu Picchu of Japan.””

Takeda flourished as a castle town, and there a former sake brewery and numerous temples offer glimpses into its storied past.

The Muromachi era (1336-1573) began when the Ashikaga clan established the shogunate in Kyoto.

The castle was supposedly built by Yamana Mochitoyo (1404-1473), the governor of Tajima Province and famous western army general in the Onin War, from 1441 to 1443 during the Kakitsu era.

Takeda Castle played an important role in guarding the border between Harima and Tajima, and also acted as a base for sorties sent to attack Harima.

During the Azuchi-Momoyama era (1568-1600), Toyotomi Hidenaga (1540-1591)—the younger brother of Toyotomi Hideyoshi (1537-1598)—was ordered to attack Takeda Castle. The goal was to subdue the Tajima generals and secure the Ikuno Ginzan silver mine. He succeeded.

The last lord of Takeda Castle was Akamatsu Hirohide (1562-1600), Hideyoshi’s vassal. Hirohide had been part of the Western Army in the Battle of Sekigahara in 1600, but was later invited by the Kamei clan of the Eastern Army to attack Tottori Castle. He attacked the castle, but was blamed for the large fire that broke out there and committed suicide on the orders of Tokugawa Ieyasu (1543-1616).

After losing its lord, Takeda Castle was abandoned in accordance with the policies of the Edo Shogunate established by Tokugawa Ieyasu. It eventually eroded into the ruins we see today where only the stone walls remain.

Sake was made for almost 400 years at the Old Kimura Sake Brewery. The distinguished Kimura family were descendants of Iio Shinzaemon, a vassal of the daimyo Takeda Shingen (1521-1573).

After the fall of the Takeda clan, Shinzaemon is said to have changed his family name to Kimura and settled in what is now Kakogawa. He moved to Takeda around 1625 and started brewing sake. After suffering two fires, the main building was rebuilt into its current form in the early 1900s. The spacious grounds are visible from the castle, and the main building with its decorative roof struts is a major architectural heritage site of Takeda. The brewery has been transformed into a hotel that gives tourists a feel for what the area has to offer.

Like the main building, the storehouse was built in the early 1900s. It was used to age sake.

It is now Tenku no Shiro (Castle in the Sky), a tourist information center for the Asago City area where Takeda Castle is located. It also houses a small museum and theater as well. 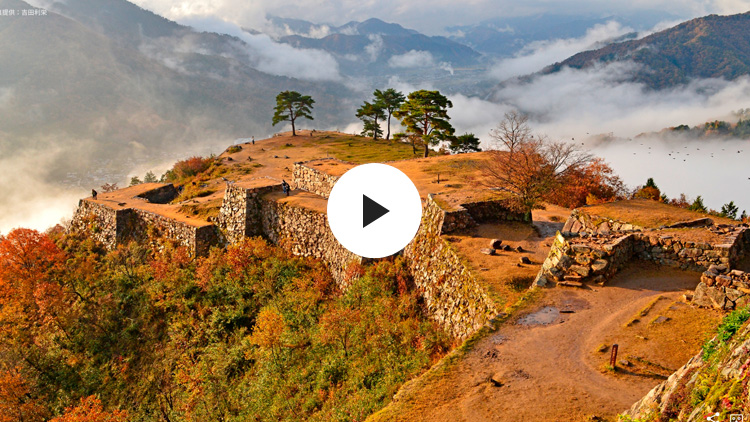