Fukuhara-kyo—the capital established by Taira no Kiyomori (1118-1181)—and Hyogo-no-tsu—the foundation of an ever-evolving trading port, were once located in Hyogo Ward, Kobe.

This ward remains at the center of Hyogo Prefecture today and a number of historical sites that tell the story of Hyogo’s modernization still remain, including a river tunnel, public water facilities, and places where Hyogo’s merchants gathered to do business. Each of these places contributed to Kobe’s enduring prosperity.

This tunnel was completed in August 1901. It was Japan’s first river tunnel and one of the largest in the world at that time.

In 1896, a storm led to severe flooding in the Minato River area.

To prevent this from happening again, a new river was dug at the confluence of the Ishii and Tennodani Rivers, then a major construction project was completed to connect it with the Karumo River through the Minatogawa Tunnel.

The tunnel is lined with bricks laid in English and stretcher bond patterns. To improve the tunnel’s stability in soft soil, a unique technique called tatezumi was employed where densely packed cobblestones were used as backfill.

The invert at the bottom was layered with bricks and covered with granite stones to provide protection against the unique types of wear that occur within a river tunnel. The outlet side of the tunnel is also made of bricks, which is characteristic of turn-of-the-century Meiji Era architecture. The design is in a highly sophisticated, authentic Neo-Renaissance style.

Kobe, which blossomed into a modern port city after Japan opened to international trade, occupies a narrow cone-shaped area of land at the southern foot of the Rokko Mountains. It was a city with poor water resources, but developed into an international port city after modern public water projects, including the construction of a large dam, made Kobe Water famous.

The Tachigahata Dam was completed in 1905 to manage the water supply system’s Karasuhara water source.

It is Japan’s fourth-oldest concrete gravity dam. It is curved with a total height of 33.33 meters, a bank length of 122.42 meters, and an effective storage capacity of 1,315,139 cubic meters. It is constructed with rough surface stones on mortar and a four-arch spillway at the center of the dam.

The water intake tower, designed by Sano Tojiro, is decorated with classical ornaments. The words “”Nourishes Without Running Dry”” are engraved on a plaque at the entrance,.

After struggling with water leakage in the Gohonmatsu Dam of the Kobe Municipal Waterworks, Sano went to India to conduct research and used what he learned on the Tachigahata Dam.

He adopted elaborate measures to prevent water leakage, such as grouting some of the foundation rock and adding finely ground bricks to the sand in the mortar to make it watertight.

This was the first dam in Japan where a village had to be evicted for its construction. It is also the first dam to use a sediment bypass system.

The Okakata Club was built in 1927 by Hyogo merchants as a social meeting hall. It was designed by Takamatsu Kichisaburo and built by Harada Kyukichi.

It is a solid, three-story reinforced concrete building in the Secession style, which was popular in the early 1900s. It features a simple composition and geometric design that emphasizes linearity and flatness, as demonstrated by its tile and stone exterior.

The arch of the main entrance, the abstract wave decoration around the roof, the oval pattern above the hall door on the third floor, and the skillful yet simple plastering from the hall walls to the ceiling are some highlights of the design. 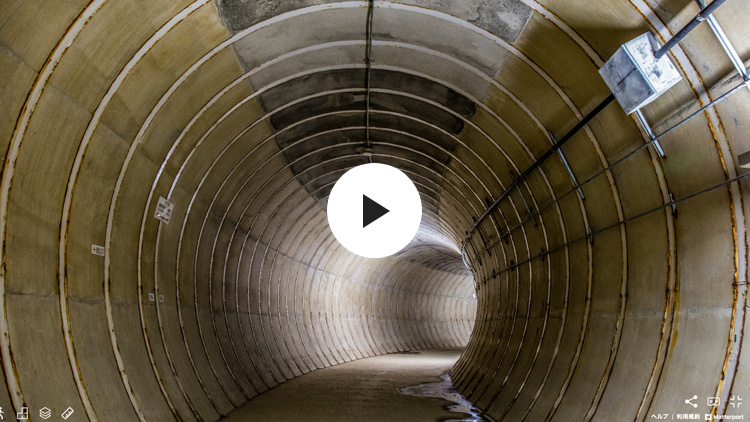